In Yugioh, a chain occurs when one action causes another card to activate in response to that action. Such actions include activating an effect or attacking. This process continues until either player cannot respond to an action anymore.

What Starts a Chain in Yugioh?

As aforementioned, a chain is what happens when several effects are trying to occur at the same time. By building a chain in Yugioh, a player can determine how the effects will resolve. So, what starts a chain in Yugioh?

Well, a Yugioh chain starts as a result of the activation of a monster, trap, or spell effect. However, the effect itself does not start a chain. This is because the effect occurs upon the resolution of a card in the chain.

A simple 2 card chain involves two steps. In step one, the player activates a Spell Card or flipped face-up Trap Card. Step 2 is now chained to Step 1 which was previously activated. If neither player wishes to chain more cards or effects, then steps 1 and 2 resolve.

However, the first player can respond leading to a 3card chain where all three steps are active. Just like in the previous scenario, if neither player wishes to activate more cards, all three steps resolve.

Can You Chain to Your Cards in Yugioh?

Yes, you can chain to your cards in Yugioh but you cannot do so without waiting to know your opponent’s response. Let’s assume player X attacks. Player Y will activate “Enchanted Javelin” and if Player X does not respond, then Player Y has the chance of chaining himself to his cards. In this scenario, Player Y can activate another “Enchanted Javelin.”

In another scenario, Player X summons a monster, and Player Y chooses to activate “Trap Hole.” Player X decides not to respond which allows Player Y to chain with “Chain Destruction.”

All these are legal moves and a player can chain a “Counter Trap” to negate the step preceding its activation. Here is an example. Player X chooses to activate “Ring of Destruction” then Player Y chains “Waboku.” 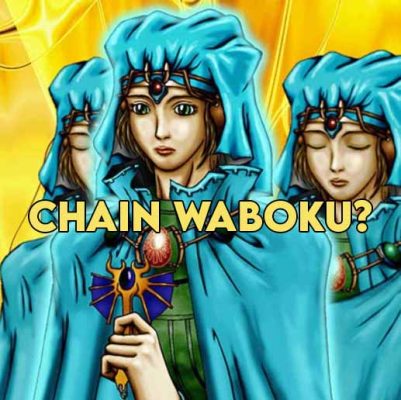 Can You Chain on Resolution?

In Yugioh, a resolution is when a player carries out a card’s effect. As aforementioned, you can chain multiple Trap and Spell cards once they’re activated. To resolve these cards, both players have to stop chaining more trap and spell cards.

There are Continuous Trap Cards with reusable effects such as Skull Lair, Ultimate Offering, and many more. To activate these Trap Cards, all a player needs to do is flip the card from face down to face up. Once activated, the player can use the card or its effect. When a player uses a Continuous Trap Card, he can chain the cards, and they can chain to the cards too. By flipping the card face up, the player can use the card and its effect.

The entire chain has to resolve before all the cards are then sent to the Graveyard. This is vital for cards such as Secret Barrel and Princess of Tsurugi where the effect usually depends on the number of trap and spell cards in play.

For example, Player X activates “Princess of Tsurugi” then Player 2 chains “Barrel Behind the Door” to the effect. Since the latter remains on the field until the chain resolves, Player X will receive 500 points of damage. This will originate from the Princess of Tsurugi Flip Effect. 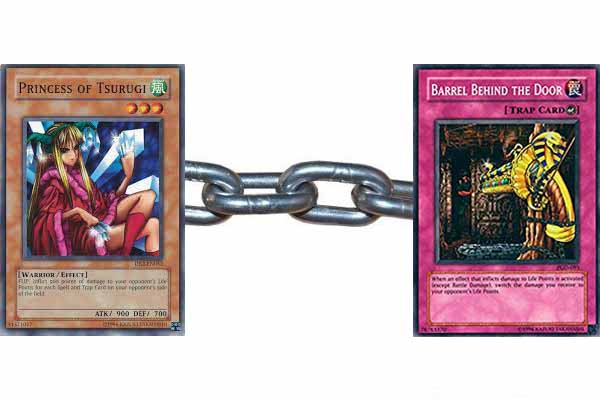 How to Resolve a Chain

When both players decide not to activate more cards or effects, the chain is complete. At this time, the chain is now resolved starting with the effect or card that was recently activated. Each card becomes resolved when Chain Link 1 resolves. While the chain is resolving, players cannot activate cards and effects.

When the entire chain gets resolved, if players have to move the cards below to another location, then they will all be sent to the Graveyard. This happens simultaneously with the resolution’s last part of the effect of the last chain.

Can You Chain to an Xyz Summon?

Summoning occurs during the Main Phase. When a player summons an XYZ Monster from the Extra Deck, XYZ Materials are usually stacked and placed underneath the XYZ Monster.

Each new effect started in a chain adds a new chain link. Usually, the chain is numbered one greater than the previous chain link number. Before you start playing Yugioh, remember that each chain link can only have a single card effect.

Want to know how to build a Yugioh deck?